Miss T’s first trip was extremely dramatic. It started as a normal day, she didn’t appear sick. She was a bit under, but not overly sick. We were going to monitor it for a few days and take her to the doctor during the week if it got worse.

When at midnight she seemed to be shivering (Though she was covered and not seemingly cold), we debated going to the ER.  We took her temperature and it seemed to be normal (36Degrees). We didn’t even know what was wrong or if anything was wrong. After much debate and deciding the ER doctors can send us off if there was nothing wrong, we got into the car and off we went.

Less than 5 minutes in the car, I figured something was wrong with my child. She was unresponsive but was shaking a bit more, I mistook that for her being cold and covered her more tightly. By now I was really worried and started praying silently. This was the child I had been praying for for ages, I could not lose her so soon.

She shook and shivered for a bit and rolled her eyes before passing out. I was devastated. We were still in the car and nowhere near a hospital. ‘Drive faster!’ I shouted to my husband.

‘What is wrong? Is she okay?’ He had asked. ‘Just drive!’ I shouted. I felt all this talking was delaying us. He was also extremely worried. He could tell something had happened and I wasn’t saying. I honestly thought she was gone. I didn’t want to check her pulse in case we had really lost her.

By the time we arrived at the hospital I was beside myself. I probably looked worse than she did from all the crying I had been doing thinking my child was gone. My husband dropped us by the ER door and I suspect I went in through the ambulance emergency door. The nurses and doctors there took her from my arms, put her on the bed, called for more help and started checking her, putting drips, brought in a fan to my distraught and started stripping her leaving only her diaper. After 5 minutes, one of the doctors came to ask me what happened. My husband came in a few minutes later (Paperwork). After getting her temperature down, she was admitted and spent the next day and night in hospital. Turns out she was having a seizure when we first started noticing her ‘shaking’ in her court. And another one in the car when I thought she was dying. And, me covering her was making her worse because the seizure was fever related. We have made a few more trips to the ER related to the seizures, but over time, we have learnt to be more aware and more diligent when it comes to managing her temperature. 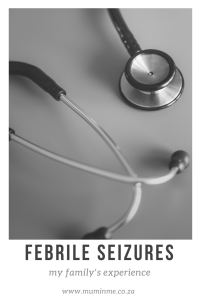 Febrile Seizures: What is it: Fever related convulsions that happen to children between 6 months to 6 years.

Febrile Seizures: What is it not: It is not epilepsy and does not mean your child is going to get epilepsy

Febrile Seizures: What to do 10 Reasons you should be taking Apple Cider Vinegar Here they bloom but for a season